Before I went to watch the movie, I was wondering how similar or dissimilar are Hrithik Roshan’s looks in Super 30 and Kites, both having him a bearded look. Does one make him look ‘on the streets, but rich’, while the other gives a slummy look? Anyway..

Super 30 is a film that comes in a while to not just entertain but inspire you. The last film that was made on similar lines was Aamir Khan’s 3 Idiots which questioned the education system of India.

This film attacks the gatekeepers of those elite institutions who allow entry only to those with a deep pocket or those with the right connections. This film celebrates those who have a brilliant mind, but not the resources to pursue their dreams of IIT coaching and traces their journey of reaching their destination.

The reason why I am comparing this film to 3 idiots is that both films have overarching themes of not to study just to score marks but to innovate and solve problems. Just the way Rancho uses the principals of electricity to drive away bullying seniors, Anand Kumar’s kids, when faced with the problem of having only one book for a class of 30, use everyday materials and waste to create something that helps the entire class read from that one book.

The first half shows the journey of Anand Kumar as a young school kid who gets selected for Cambridge but isn’t able to go due to lack of funds. Soon after, his father dies trying to accumulate money for him for Cambridge. But the dual shock of him not going to Cambridge and his father’s death forces him to abandon all hopes of studying any further and start supporting his family by selling papads. He also asks his love interest, played by Mrunal Thakur, to leave him and accept one of the rishtas coming for her.

Things take a turn when he is approached by an IIT coaching institute owner to start teaching in his institute. In return, he is rewarded with all the conveniences of a middle-class family’s life and his life betters almost overnight. He is seen riding a motorbike, wearing a gold chain, renovating his house, which in small-town India means you have arrived arrived. In between, his girlfriend also makes a return seeing his success.

However, an incident makes Anand Kumar remember something that his father said and is something that is repeated too often in the film, almost to turn you off of it.

He remembers that by teaching in this institute, which probably resembles IIT coaching institutes like FIITJEE, Bansal Classes, Aakash Institute or so many like them, which only the well to do can afford, he is basically continuing with the same trend of making the raja ka beta raja and not helping those who really need it.

He invests all his savings, and is also seen selling off his clothes and utensils to run the Super 30 coaching classes. Brilliant IIT aspirants who are otherwise made to do odd jobs apply and 30 most deserving get selected.

Just when the Super 30 class, Patna is about to start, one aspirant who did not get selected because of one mark walks in and requests to be accommodated. He is turned down and he is made an example to make the class realise the value of one mark and how it can separate those who enter IIT and those who don’t. Later the kid is asked to work hard and apply next year. I would have hated to be that kid.

Another incident, where a rich kid, who was once Anand sir’s student in the ‘rich kid IIT coaching institute’, asks him “I want you as my teacher. But is it my fault that I am rich?” This makes you feel for the kid who has done no wrong to not be taught by Anand Kumar. But then he quickly asks him a question to answer him. He asks did you eat today and the kid nods in affirmation. He then points to his batch of Super 30 and says, they haven’t. That is why they are deserving. Because a rich man can easily hire an equally good or a better tutor than Anand Kumar, but a poor person does not have the luxury to do so.

The second half is a bit loose and you fail to connect with the children’s or Anand Kumar’s struggles to meet everyday needs. Some portions are also very filmy and do not have much connection with reality. However, Hrithik’s brilliant acting tries to hold every scene together.

If you have an unfulfilled desire and the going seems tough, watch this film as it might just surprise you as to how many everyday things we take for granted and how much power do we all have to accomplish whatever we set our mind to.

The strange bedfellows are back in bed and conspiring to deliver another mammoth hit in the form of Batla House, a biopic of sorts tracing back the events that led to the encounter and its aftermath.

This time, another of my favourite songs, O Saki Saki from the 2004 film Musafir, will be tinkered with to try and sound fresh to these ears which haven’t heard a decent song in decades now.

The teaser poster (these are also a thing now?) of the song is out and the song’s teaser (wow!) will be out tomorrow on Nora Fatehi’s twitter page and on T-Series’ YouTube page. 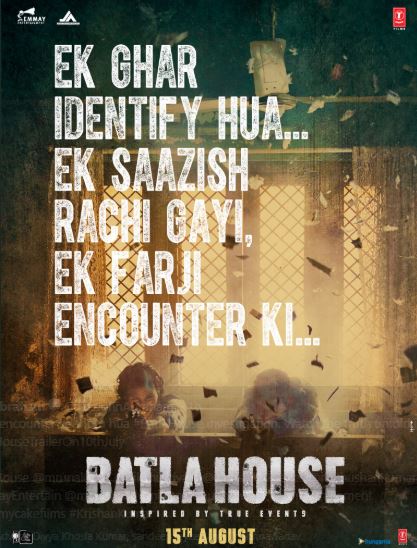 The incident of the infamous Batla House encounter that happened way back in 2008 has been refreshed off-late, thanks to the John Abraham-starrer that’s up for release. The sharply-cut trailer has created a lot of expectations from the film and fans can’t keep calm (quite literally).

After a slew of films from Abraham trumpeting the deshbhakt in him, we see yet another deshbhakt in Abraham baying for the enemies blood. Even then, he doesn’t look tired or boring playing a cop. In fact, he looks to have matured doing such roles. Even when Romeo Akbar Walter did not go the way the makers of the film planned, it reinforced his image of an honest, patriotic man which he has been carrying on since Wazir, Dishoom, Parmanu, Satyameva Jayate and now The Batla House case.

In my way, he has matured pretty much how Shahid Kapoor took a leap of faith and surprised all of us with Kaminey.

The Batla house trailer gives the impression that it is going to be an interesting thriller with courtroom and media drama playing parallelly. And the surprise packages in Mrunal Thakur, who would be seen in two back to back releases in the form of Super 30 and Batla House, coupled with Nora Fatehi’s dancing moves, will surely give a tough competition to the other two BIG Independence Day releases – Saaho and Mission Mangal.

And now, even Netflix’s Sacred Games 2. But I don’t consider Sacred Games to be that much of a competition to the three big releases as moviegoers wouldn’t watch a first-day first show of their favourite star to binge watch a Netflix show.

Now, here I have to say that the Akshay Kumar starrer Mission Mangal’s teaser (not the trailer), which came just a few hours before Batla House, has not really generated that much of an interest and was struggling to be in the top 10 of YouTube’s trending videos list.

Honestly, it reminded me of the other recent film that Akshay Kumar played a NASA scientist in, pumpkin-headed aliens were roaming around trying to look dangerous. The way he said the initial few lines showed a lack of conviction towards the role and it may not set the cash registers ringing.

​
In a recent interview Kangana Ranaut revealed that she was approached for The Dirty Picture, which she rejected and has no qualms about doing so…

​​Considering what it did to Vidya Balan and her career, would you think it would have been wiser had Kangana given it a thought …and eventually a shot?

I think no. Having seen the movie, it is hard to imagine anyone else play the role of Silk Smitha so convincingly. Balan is a South Indian and it is but natural to get a good actress hailing from South India to play the character of Smitha, rather than a fair-skinned actress from North India who herself might not be convinced about playing the part. Vidya Balan, post the release, herself admitted in an interview that doing the Dirty Picture was a risky affair, and had it not worked, she would have quit.

There are risks that pay off and there are some that don’t. It’s upon you how much are you ready to put at stake. It might not hurt Kangana as much as she has some really good films lined up.
Except Krrish 3, all the other films she’s doing has a women-centric role and her playing the central character. (Rajjo, Revolver Rani and Queen)

Sometime ago, when releases had dried up or were in the offing, she was dubbed the sequel queen. She was supposed to be doing the Tanu weds Manu, Ishqiya (titled Dedh Ishqiya) sequels and of course Krrish 3.

We are still waiting for news on the other two…

Here’s wishing her all the best for all the future releases and her career.

The game isn’t about entering the 100 crore club anymore. The surprise entry of Grand Masti and Bhaag Milkha Bhaag may push the superstars to look for bigger landmarks. The 200-crore club may fast be becoming the new fad, but it wont be a reality before we have a few more names to really call it a club. But there is a big chance that the list may get crowded until the end of the year.

There is a tremendous amount of buzz around Krrish 3. Not only has it garnered the most amount of views for any Indian film trailer on Youtube, but is also riding on the goodwill of what looks like a genuine effort at creating India’s first superhero franchise. Presence of Priyanka Chopra, fresh with her newly found international fame, Vivek Oberoi – the newest entrant to the 100 crore club and Kangana Ranaut – who has been missing in action for a lot of time is only going to help its prospects. Its a Diwali weekend and makers are known to increase ticket prices. Plus, it will be releasing in a record 5200 screens. Nothing seems to going wrong for the movie at the moment.

Another film which is lying low at the moment, but is expected to begin its blitzkrieg promotions shortly is Dhoom 3. Another franchise, another superstar, but unlike anyone else. The first look, and not even the trailer, has made Indian cinema lovers gasping for more. People love seeing their favourite superstars in negative roles and it has been a while since Aamir Khan did one. His 2008 release Fanaa saw his playing a terrorist and incidentally, it was with the same banner. Guess the baddie roles have to do with some bad blood between the banner and the star. Anyway…

Saif Ali Khan’s Bullet Raja, Shahid Kapoor’s R… Rajkumar and Sanjay Leela Bhansali’s Ram Leela have managed to create a strong momentum in their favour, and are the other hopefuls to enter the 100 crore club. Depending on the promotions close to the release, the prospects of how these films open and how fast they reach the 100 crore mark and eventually enter the 200 crore mark, will decide the future of the industry.